Update: I’ve already modified my profile by removing most of the images. Once the last contest is over, I will be removing the rest of the images that don’t suit my brand. I’ve also made a large donation to a women’s empowerment organization. Over the last few months, I heard one name mentioned by my fellow entrepreneurs more than others.

Can you guess who it is? It’s not Elon Musk or any other popular entrepreneur… It’s Dan Bilzerian – the man with over 5 million Instagram followers (some of his pictures aren’t safe for work).

If you aren’t familiar with Dan, I can tell you he’s pretty much the modern Hugh Hefner. He posts pictures of his lavish life and all of the women he is surrounded by on a daily basis.

It isn’t Dan’s lifestyle that interests me, however. It’s what other entrepreneurs say about him. In essence, they love his life because they can’t have it.

For example, I was meeting one of my buddies in New York, who has a few billion dollars, according to Forbes. He is married and has kids. He, as well as a few of my other wealthy friends, love talking about Dan and living vicariously through his Instagram profile.

This made me think: how can I replicate Dan’s Instagram success, but with a much more toned-down version?

Getting a head start

The toughest part of any marketing campaign is getting it off the ground. Once you have a proven model, scaling it becomes easy.

To get a head start, I hired Branden Hampton who has over 30 million social media followers among all his accounts. My goal was to pay Brandon to leverage his profiles and get his followers to come over to me.

But Brandon had a better idea. Why not start with an existing account that already has over 100,000 followers and then leverage his follower base?

We bought an existing lifestyle account that had roughly 131,000 followers and changed its name to @whoisneilpatel.

If you are wondering why that name was picked instead of my name “@neilpatel,” it’s because our goal was to generate Google searches for my name due to the fact that Instagram doesn’t let you link out. Plus, the @neilpatel name was taken.

Increased search traffic for my name means a higher number of people finding my sites, which helps me generate leads and, eventually, revenue.

What I learned is that when you change a profile name on Instagram, a portion of the existing followers drop off. Why? Because they followed the original account and not you.

In essence, you are pulling a bait and switch tactic. It’s only been a few weeks since we took over this account. I expect the bleeding to slow down significantly, if not stop altogether, over the next few weeks.

The one thing I know about social media is people love free stuff. So, we decided to throw weekly contests to give away prizes.

I spent the majority of the money on prizes. The goal was to give away everything within 30 days, using not only my account, but other people’s accounts as well. In addition to spending the money to buy the prizes, we paid models to shoot themselves with the prizes and give some of them away on their profiles.

For example, we paid Arianny Celeste, the UFC ring girl, to promote my account and give away prizes. Every time a girl like Arianny posted about the @whoisneilpatel account, roughly .2% of her followers followed me. To speed this up, I also paid more models and lifestyle accounts to post about me.

That’s how I got to 143,000 plus followers now – not too bad, considering I am still losing followers because of the name change of the account I purchased. Plus the contests have generated over 11,000 uses of the hashtag “whoisneilpatel”.

Along with losing a few followers, I have also learned a few other things.

I thought a giveaway would be a great way to get more Instagram followers and gain popularity in the entrepreneurship community, but entrepreneurs don’t care about free prizes or cash.

Why? Because a lot of them already have money.

But every time one of these girls posted about me, I would receive one or two text messages from entrepreneurs who have businesses that generate at least $10,000,000 in revenue asking me how I knew the model that mentioned me. 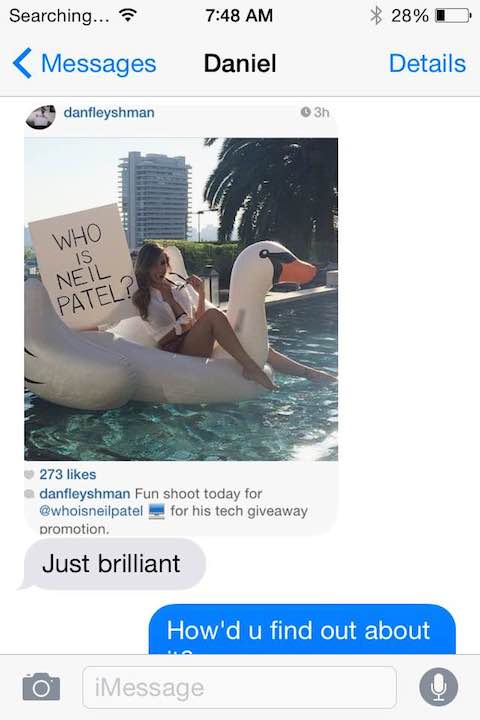 Heck, I was even getting text messages from people like my personal shopper, who saw models post pictures about me. Not only that, but the number of Google searches for my name increased by 71%.

That’s not too shabby, considering the screenshot above is for search traffic of a listing that ranks my name at #3. Quick Sprout, which ranks at #1 and #2, has seen a much bigger increase, but it’s hard to determine the exact increase as Quick Sprout ranks for thousands of other terms on Google.

Although search traffic increased for my name, I wasn’t able to generate any more leads. I was generating non-qualified traffic to my websites.

The text messages received from other entrepreneurs, on the other hand, will eventually lead to more business and pay for the expenses. So from a financial standpoint, the experiment is a success… especially when you consider that images pertaining to me where broadcasted to over 20 million people on Instagram.

It hasn’t been even 30 days since I launched this Instagram marketing campaign. I still have prizes to give away. The initial experiment Brandon helped me with ends on November 7th.

I learned from him that users on Instagram like flashy images such as pictures of cash, jets, and exotic locations. So, Brandon and I posted these types of images as a test. We discovered that this approach worked well.

But it isn’t me, and in the long run, I don’t want to showcase pictures of cash, women, or private jets on my profile even though it works. Once the experiment is over, I will post more quotes, which also did really well as well as pictures from my daily life.

I’m probably being a bit too careful, as some of images Branden picked received 4% to 5% engagement which is much better than what most profiles sit at, which is 2%. None-the-less it will be fun to test different image concepts.

I’m also going to adjust the strategy by stopping the prizes. I will also post more personalizd images on my profile such as of my family and leverage female and lifestyle accounts to promote me. For example, I may do a video Skype session with a female model, create a screenshot of it, and have her post it on her Instagram profile, with a mention of me giving her business or marketing advice. What’s fascinating is that if you look at the image above, you’ll notice that the search volume for these models is skyrocketing. Men, some of whom happen to be entrepreneurs, follow these girls.

It’s rare for these models to do well financially, so they continue to accept money for Instagram posts. As long as they accept my cash, I’ll continue to pay these women to post about me. It will help me stay present in other entrepreneurs’ minds and generate long-term revenue.

I don’t know what will happen to my brand in the long run as a result of this type of Instagram marketing, but the initial results look promising. I expect a return on my investment.

I was actually trying to spend $100,000 within the first 30 days so that I would have a more friendly blog post title, but I decided to hold off until I figured out the exact ROI. Once I fine-tune the approach I think I can get the cost down to $10,000 to $20,000 a month, and I should be able to turn a profit within 3 to 6 months.

What do you think about Instagram marketing? Do you think it is worth leveraging from a personal branding perspective?