Besides the obvious answer of generating leads and making conversions, it’s maximizing engagement.

You want your audience to take an active interest in your content and interact with your brand.

This typically comes in the form of likes, shares, comments, etc.

But there’s a new format that’s really picking up steam, and that’s surveys.

Here’s an example of one Jeff Bullas used to figure out what his audience’s goals were when using LinkedIn:

When done correctly, surveys are excellent engagement boosters because:

Surveys ultimately enable you to raise the collective interest in your brand and attract a larger portion of your target demographic.

By building this interest, you can get people to pay more attention to your brand and hook more customers.

You can use this information to improve your marketing, fine-tune your offerings and so on.

What I’m trying to say is that surveys accomplish several important things all at once.

Not only are you increasing engagement and building interest in your brand, you’re reeling in leads and doing market research at the same time.

But here’s the thing.

There’s a lot more to it than just slapping up a survey and waiting for the sales to start pouring in.

Like any aspect of marketing, it requires the right strategy and an understanding of how to make your surveys appealing to your audience.

Otherwise, no one is actually going to respond.

In this post, I’m going to explain how to use surveys the right way, how to increase your response rate and how to turn respondents into customers.

I’ll also highlight some platforms you can use to get started.

Don’t be a nuisance

Let me start by saying you need to use tact when asking people to participate in surveys.

To cope with this onslaught, people have to pick and choose what to participate in, which often makes them reluctant to take part in surveys.

After all, it takes time and effort.

Even if there are only a few questions, people have to take time out of their days to fill out a survey.

So it’s super important that you’re not being a nuisance when asking people to participate.

You need to go about it the right way.

Ideally, you’ll target individuals who are already familiar with your brand and have proven they have an interest.

It’s much easier to get someone to participate if there’s some level of built-in loyalty already there.

Just look at the difference in response rates: When you’re just getting started, I recommend targeting Facebook followers, email subscribers and so on.

Go after those with whom you already have a level of rapport and who developed loyalty to your brand.

Here’s a good example of IKEA hitting up its Facebook followers with a survey: Believe me, it’s much easier to get these people to take action than those who have never heard of you.

If someone already has a vested interest in your brand, they should have no problem supplying you with their feedback.

Most people are willing to answer a few questions.

But not many are willing to answer a dozen or more questions.

The longer the survey, the lower the response rate will be.

For instance, most people wouldn’t want to bother with a survey like this: 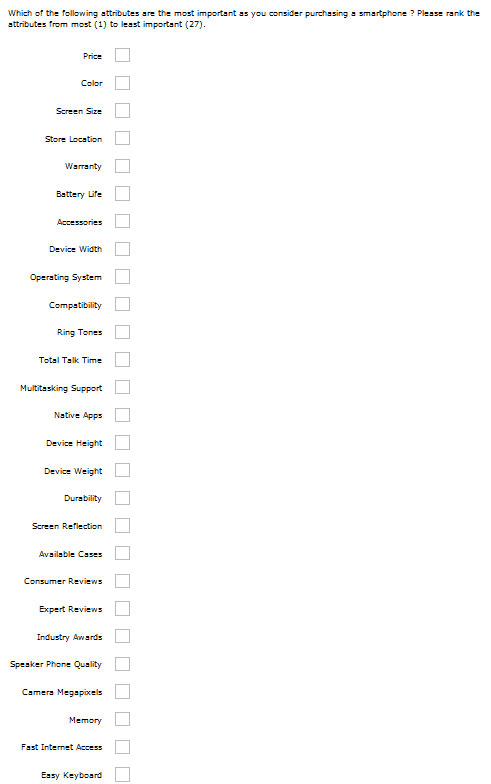 It’s just too big of a time commitment and requires too much mental energy.

And quite frankly, it’s a little intimidating.

But responding to a survey like this is no big deal:

Keep this in mind when deciding on the number of questions to ask.

In most cases, most people have a “what’s in it for me?” type of mindset.

Maybe they’re unwilling to participate in a survey as is.

But you can always sweeten the deal by incentivizing things.

Here’s an example from Artifact Uprising: Here’s another from Babies R’ Us/Toys R’ Us: Earning $10 or being given a chance to win a $250 gift card is a pretty strong incentive.

This would definitely pique the interest of many people.

But you know what?

Your incentives don’t necessarily need to be over the top.

In fact, deals like these aren’t in the budget for everyone.

But I’ve seen many brands do quite well and increase their survey response rates significantly by including a promotional code for 15% off shipping on the next order.

And think about it.

An offer like this also encourages people to buy.

Here’s what I recommend.

Do some A/B testing offering a survey without an incentive and then one with an incentive.

See how big of a disparity there is, and use this data to decide whether or not to use incentives for future surveys.

There’s also the issue of timing.

It’s imperative you offer surveys at the right time, when people are most likely to respond.

Let’s say someone just subscribed to your newsletter.

You wouldn’t want your first email to be asking them for their input.

It just wouldn’t make sense and would be annoying.

A better approach would be to occasionally target subscribers who consistently open your emails after they’ve had a chance to get comfortable with your brand.

They should be a lot more receptive to such requests and willing to participate.

We’ve established that surveys have multiple uses and can be used to hook more customers.

We’ve also discussed some fundamental strategies for pulling surveys off effectively and maximizing their response rates.

But how do you get started?

Enter a title for your survey:

You’ll then come to this screen:

From here, you’ll want to add your questions by clicking here:

Enter your questions, choose the question type and include images if you want: Rinse and repeat until you’re done.

At the end, you’ll be able to preview your survey and finally publish it.

Facebook is a good place to experiment with surveys if you have a sizable audience already familiar and comfortable with your brand.

You can create surveys that are quick and easy to answer, and they can be integrated seamlessly with the rest of your posts.

If one of your followers is interested, they can instantly participate.

If not, they can simply keep scrolling through their feed.

When you’re looking to create surveys for your website, blog, email, etc., there are several different platforms to choose from.

One of the most popular is Survey Monkey.

I find it to be straightforward and easy to use.

The best part is the basic version is free.

You’re limited in terms of the number of questions you can include and the number of responses, but it should be enough to get the ball rolling.

If you want more features, you can always upgrade later.

Here’s a screenshot of the different plans available with Survey Monkey: If you’re looking for reviews on other survey platforms, I recommend reading this post from WordStream.

It will tell you pretty much everything you need to know and give you the rundown on some of the top platforms.

Surveys are nothing new.

They’ve been used for thousands of years.

But using them as a content marketing tool is fairly new.

They’re gradually becoming more popular but have yet to be used on a massive scale.

This means there’s plenty of opportunity if you know how to use them correctly.

As I pointed out before, surveys offer a means of accomplishing three important things:

All three are huge for your bottom line.

And once you get the hang of the process, you can use it time and time again.

How often do you participate in surveys?